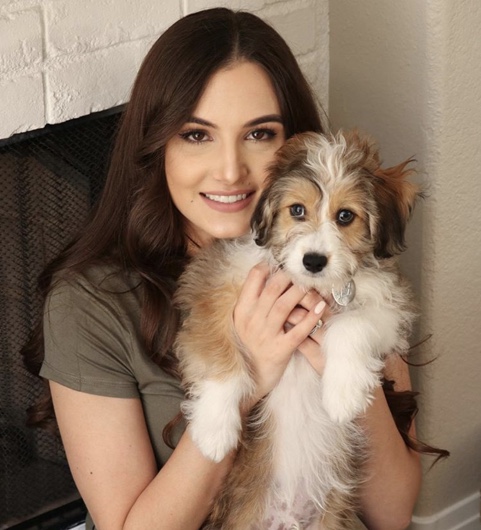 I finally had a break from pain when Jax came into my life. I have been going non-stop with some type on pain interfering with my life since I was 16 years old when I was diagnosed with scoliosis. After getting that pain under control, I was diagnosed with Costochondritus, the inflammation of the cartilage that connects a rib to the breastbone. This is only supposed to last a few months, but I've had it for the past 2 years and it has spread to multiple parts of my body. Because of the way it’s spreading, and my recent diagnosis of Hashimoto Thyroiditis, the doctors believe the inflammation is caused by another autoimmune disorder. On top of that, I was also in a car accident in 2017 that left me with chronic pain to my neck. I lived in pain daily, unable to escape it and nothing could relive it. It effected my mood, friendships, happiness and my overall personality. There was a point I couldn't even recognize who I was because I was in such a dark place caused by pain.

I got married at the end of last year to my high school sweetheart. My husband and I were talking about getting a dog, but we decided it probably wasn't the time. That was until I found Jax. Just like my husband came into my life at the least expected moment, so did Jax. I was on my lunch break when I randomly was looking at puppies. When I saw his picture, I knew I needed him. I knew he was supposed to be mine. Thankfully, my husband said "yes"!

Jax has only been in my life for one month, but in this past month, I have had less pain than I have had the past two years. My pain management doctor even said he could tell how much Jax has helped me. He is a ball of energy, but he is exactly what I needed. I'm so thankful for this little Aussiedoodle who helps me every day deal with my chronic pain!"

"She gives us more love than we could have ever imagined"

"She gives us more love than we could have ever imagined"